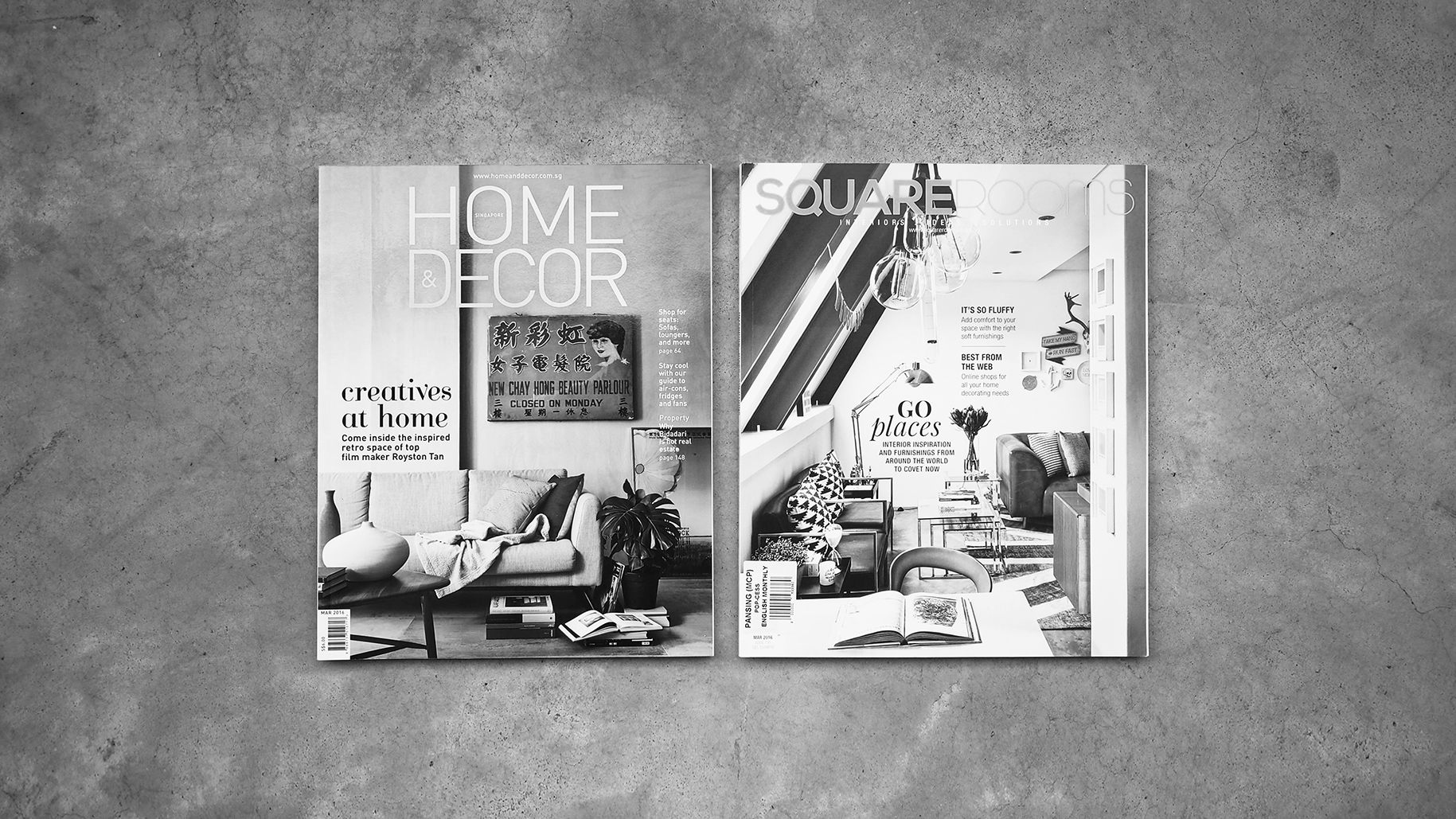 CAFE+SHOP+MUSEUM HOUSE / OR THE HOUSE FOR A SERIAL COLLECTOR!
March 2016 Home and Decor, and Square Rooms Magazines

We are pleased for Café+Shop+Museum House / or the House for a Serial Collector to be featured in the March 2016 magazine editions of both Home & Decor as well as Square Rooms. You can read to find out more in the article “Homes of Creatives: Display of Affection” from Home & Decor’s publication, and Square Room’s coverage in their article “Retro Redux”. Do drop us an email enquiry if you would like to know more about our work! 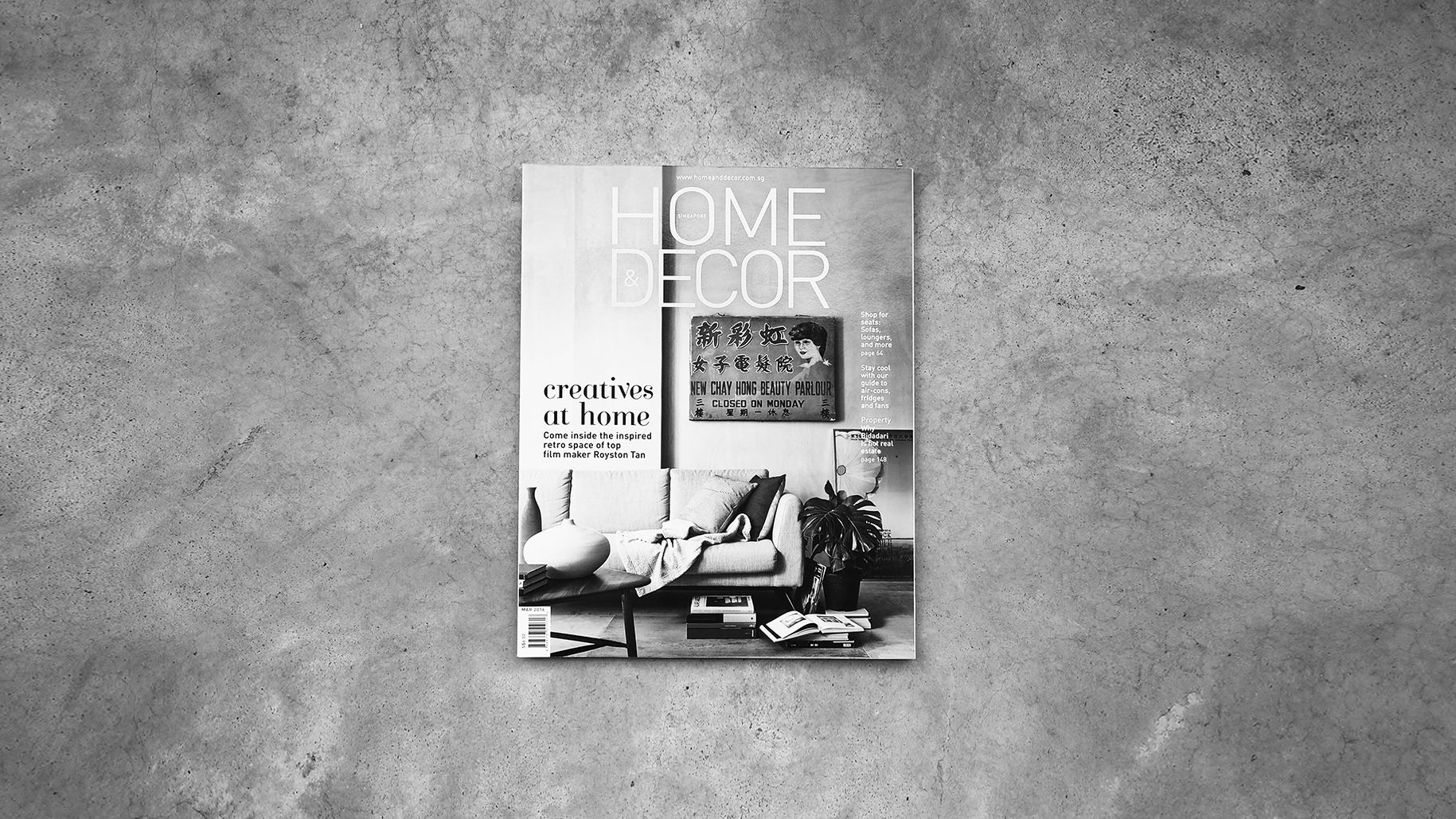 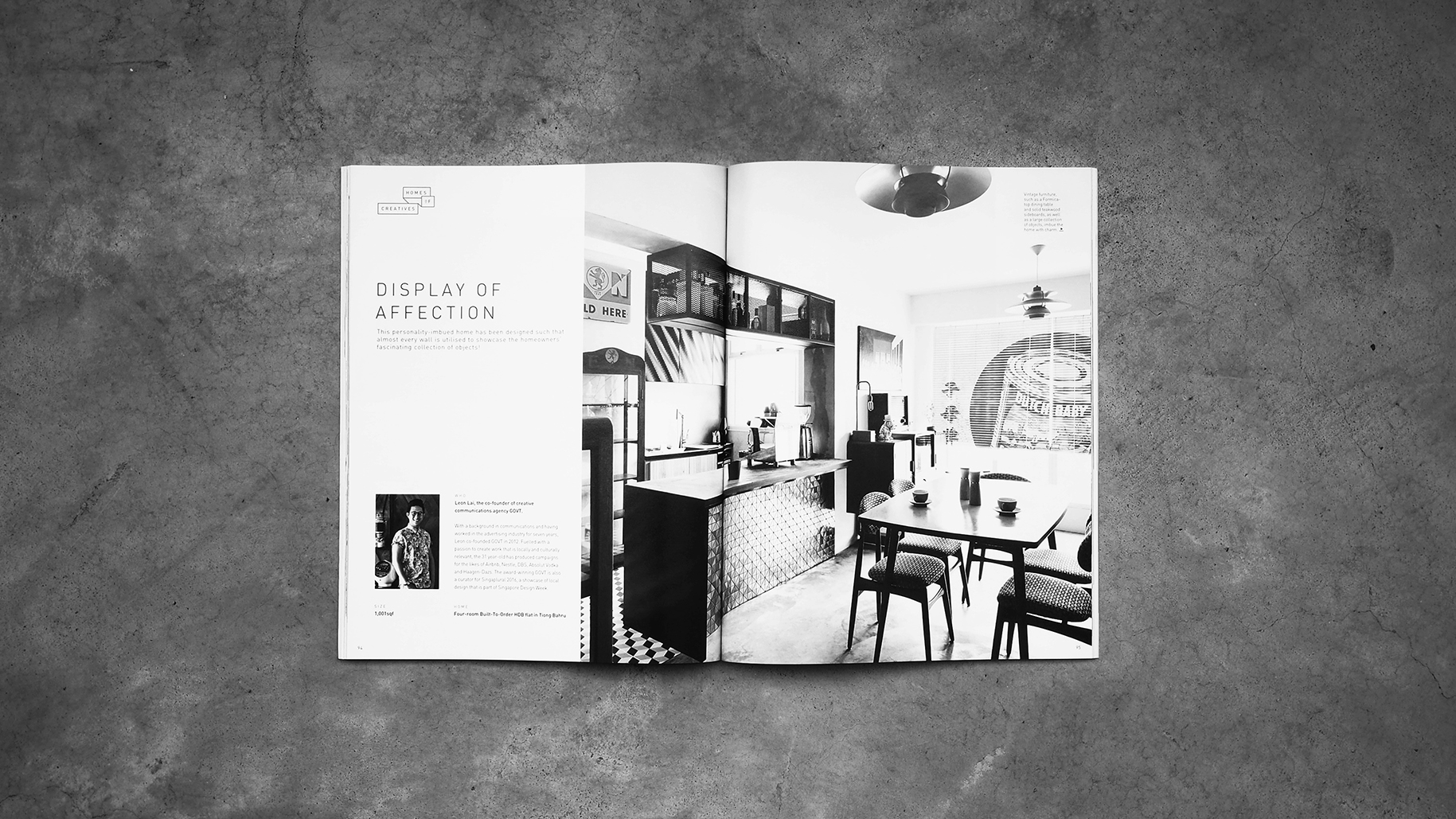 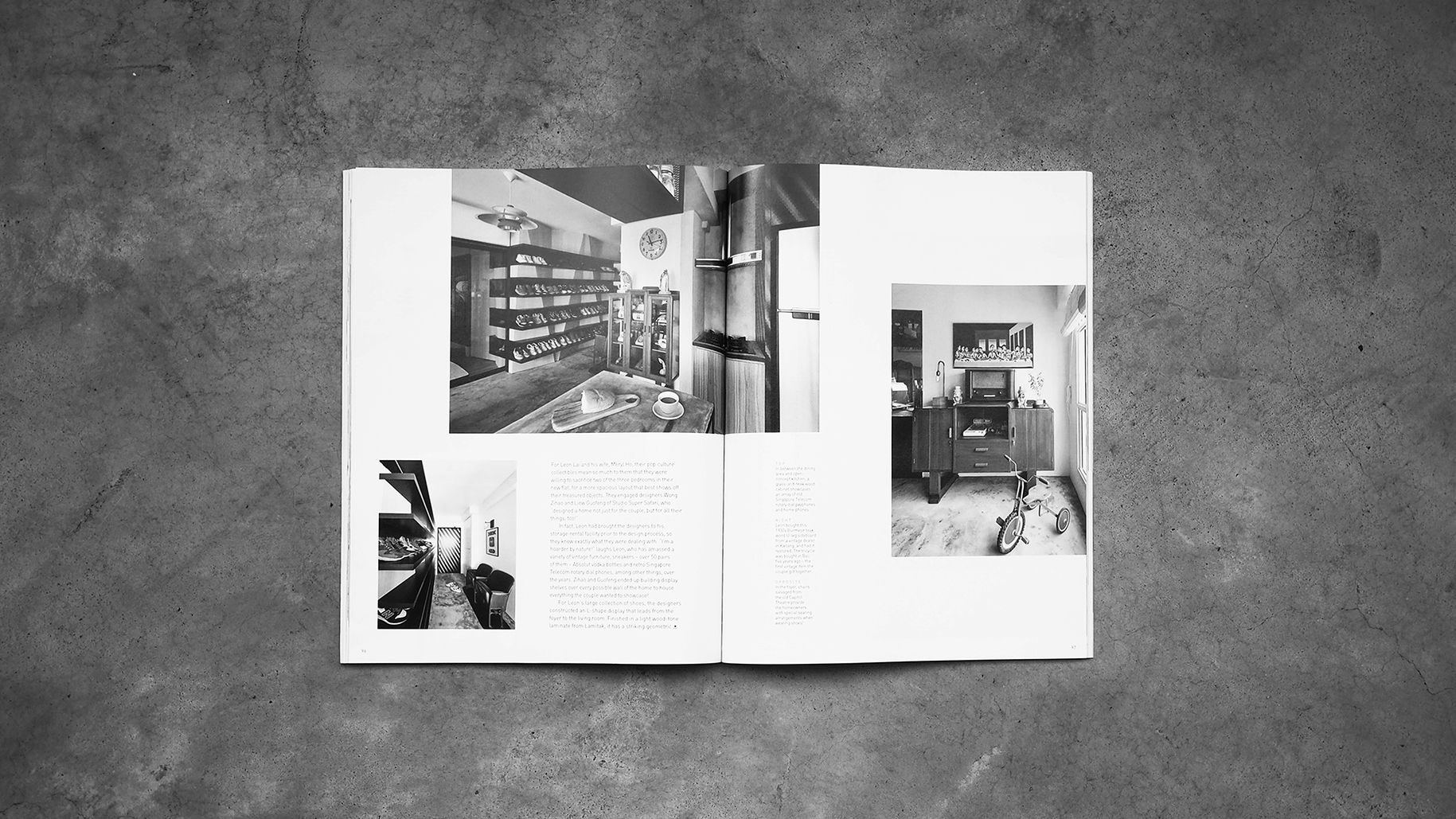 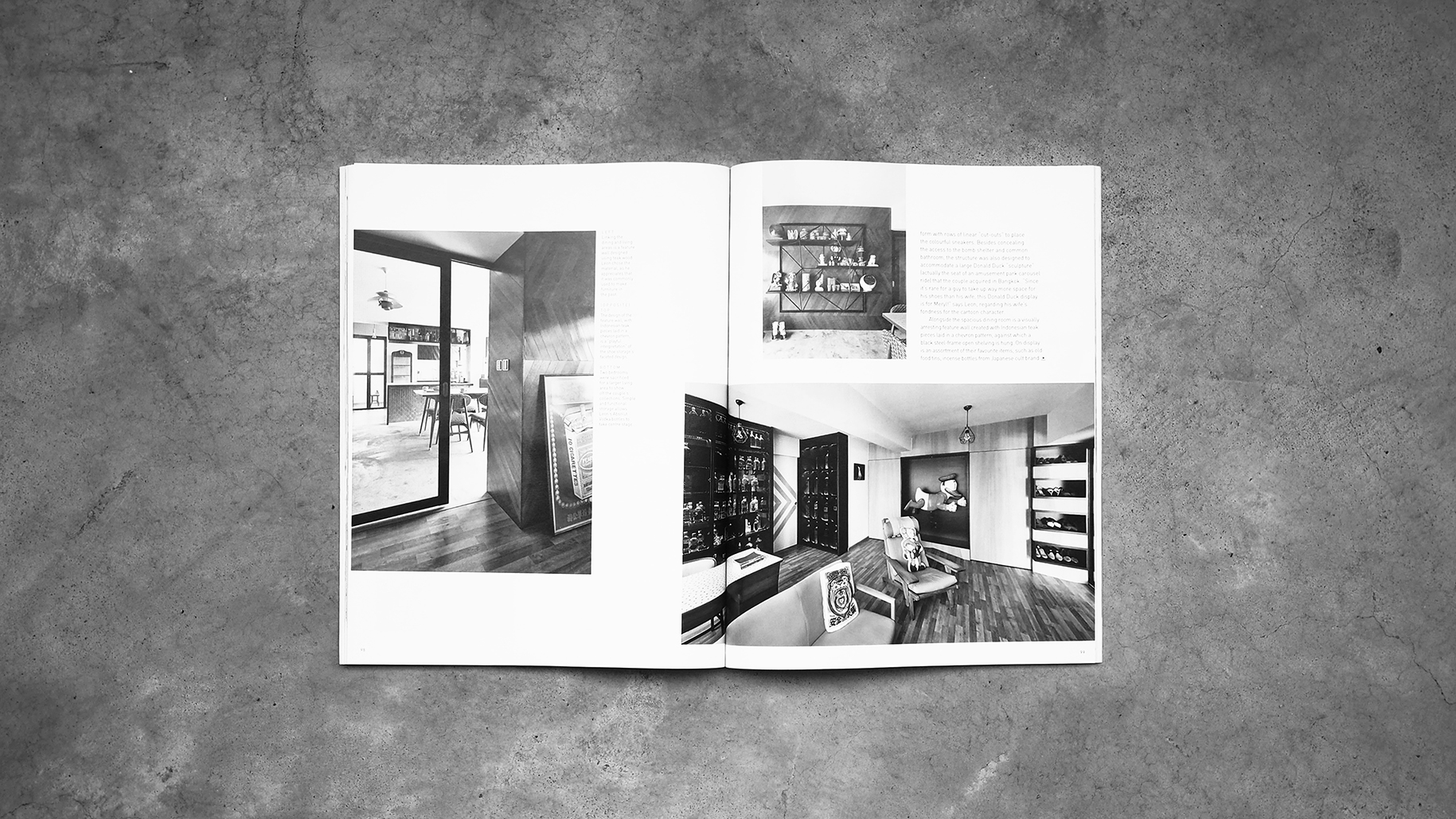 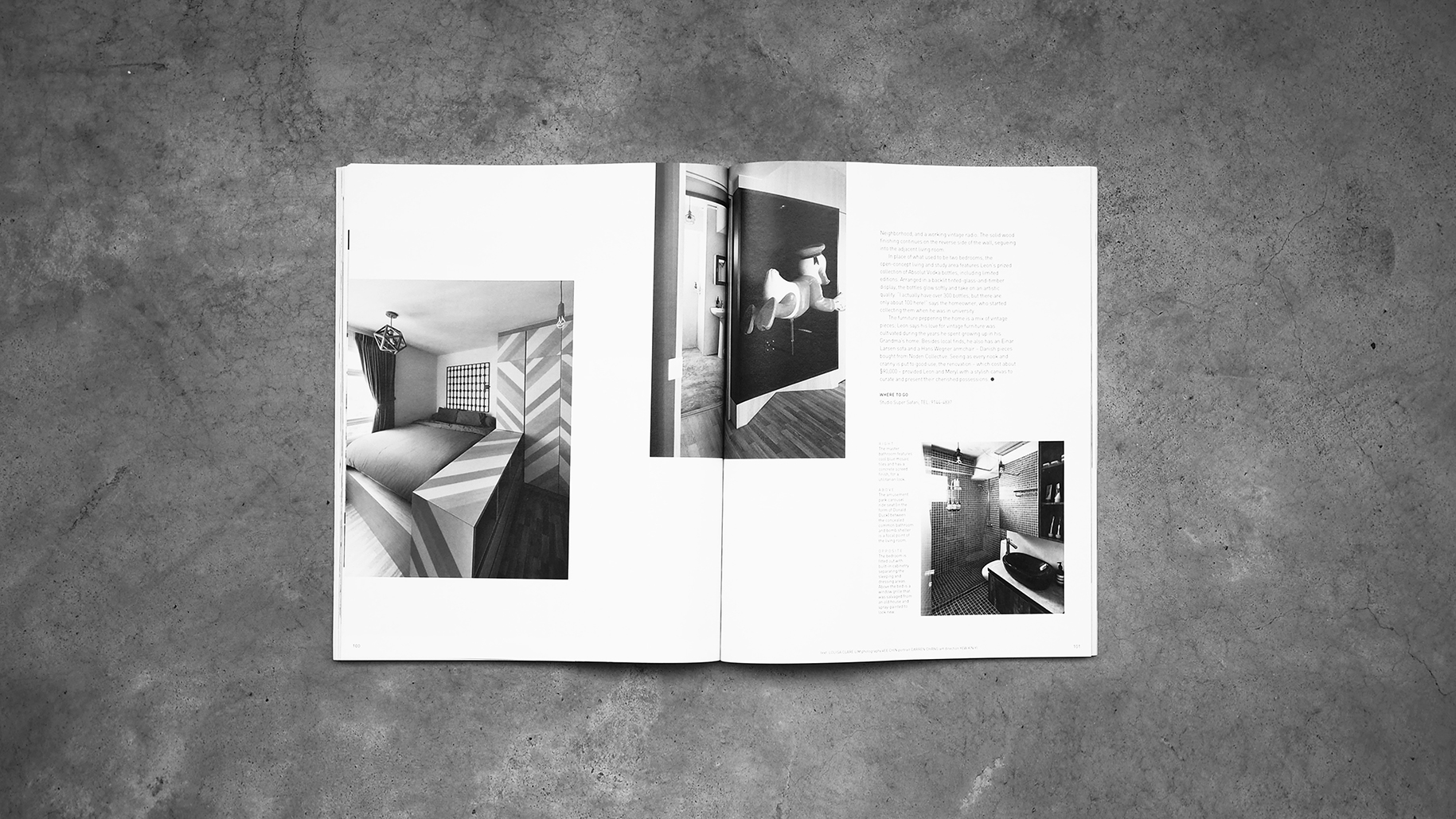 “Display of Affection”
This personality-imbued home has been designed such that almost every wall is utilised to showcase the homeowners’ fascinating collection of objects.

Who
Leon Lai, the co-founder of creative communications agency GOVT.
With a background in communications and having worked in the advertising industry for seven years, Leon co-founded GOVT in 2012. Fuelled with a passion to create work that is locally and culturally relevant, the 31-year old has produced campaigns for the likes of Airbnb, Nestle, DBS, Absolut Vodka and Haagen-Dazs. The award-winning GOVT is also a curator for Singaplural 2016, a showcase of local design that is part of Singapore Design Week.

Home
Four-room Built-To-Order HDB Flat in Tiong Bahru.
For Leon Lai and his wife, Meryl Ho, their pop culture collectibles means so much to them that they were willing to sacrifice two of the three bedrooms in their new flat, for a more spacious layout that best shows off their treasured objects. They engaged designers Wong Zihao and Liew Guofeng of Studio Super Safari, who “designed a home not just for the couple, but for all their things, too!”

In fact, Leon had brought the designers to his storage-rental facility prior to the design process, so they knew exactly what they were dealing with. “I’m a hoarder by nature!” laughs Leon, who has amassed a variety of vintage furniture, sneakers – over 50 pairs of them – Absolut vodka bottles and retro Singapore Telecom rotary dial phones, among other things, over the years. Zihao and Guofeng ended up building display shelves over every possible wall of the home to house everything the couple wanted to showcase!

For Leon’s large collection of shoes, the designers constructed an L-shape display that leads from the foyer to the living room. Finished in a light wood-tone laminate from Lamitak, it has a striking geometric form with rows of linear “cut-outs” to place the colourful sneakers. Besides concealing the access to the bomb shelter and common bathroom, the structure was also designed to accommodate a large Donald Duck “sculpture” (actually the seat of an amusement park carousel ride) that the couple acquired in Bangkok. “Since it’s rare for a guy to take up way more space for his shoes than his wife, this Donald Duck display is for Meryl!” says Leon, regarding his wife’s fondness for the cartoon character.

Alongside the spacious dining room is a visually arresting feature wall created with Indonesian teak pieces laid in a chevron-pattern, against which a black steel-frame open shelving is hung. On display is an assortment of their favourite items, such as old food tins, incense bottles from Japanese cult brand Neighbourhood, and a working vintage radio. The solid wood finishing continues on the reverse side of the wall, segueing into the adjacent living room.

In place of what used to be two bedrooms, the open-concept living and study area features Leon’s prized collection of Absolut Vodka bottles, including limited editions. Arranged in a backlit tinted-glass-and-timber display, the bottles glow softly and take on an artistic quality. “I actually have over 300 bottles, but there are only about 100 here!” says the homeowner, who started collecting them when he was in university.

The furniture peppering the home is a mix of vintage pieces, Leon says his love for vintage furniture was cultivated during the years he spent growing up in his Grandma’s home. Besides local finds, he also has an Einar Larsen sofa and a Hans Wegner armchair – Danish pieces bought from Noden Collective. Seeing as every nook and cranny is put to good use, the renovation – which cost about $90,000 – provided Leon and Meryl with a stylish canvas to curate and present their cherished possessions. 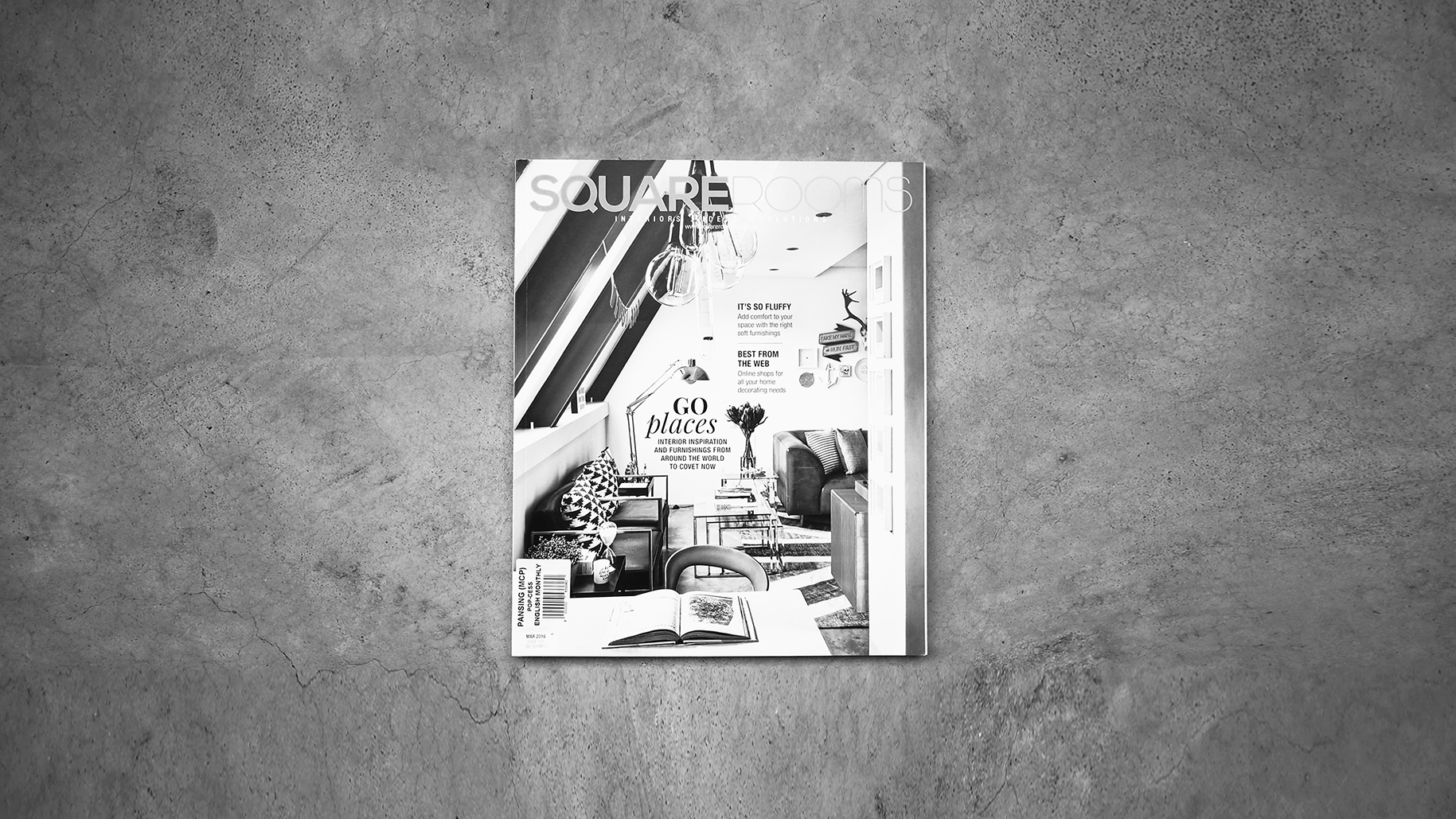 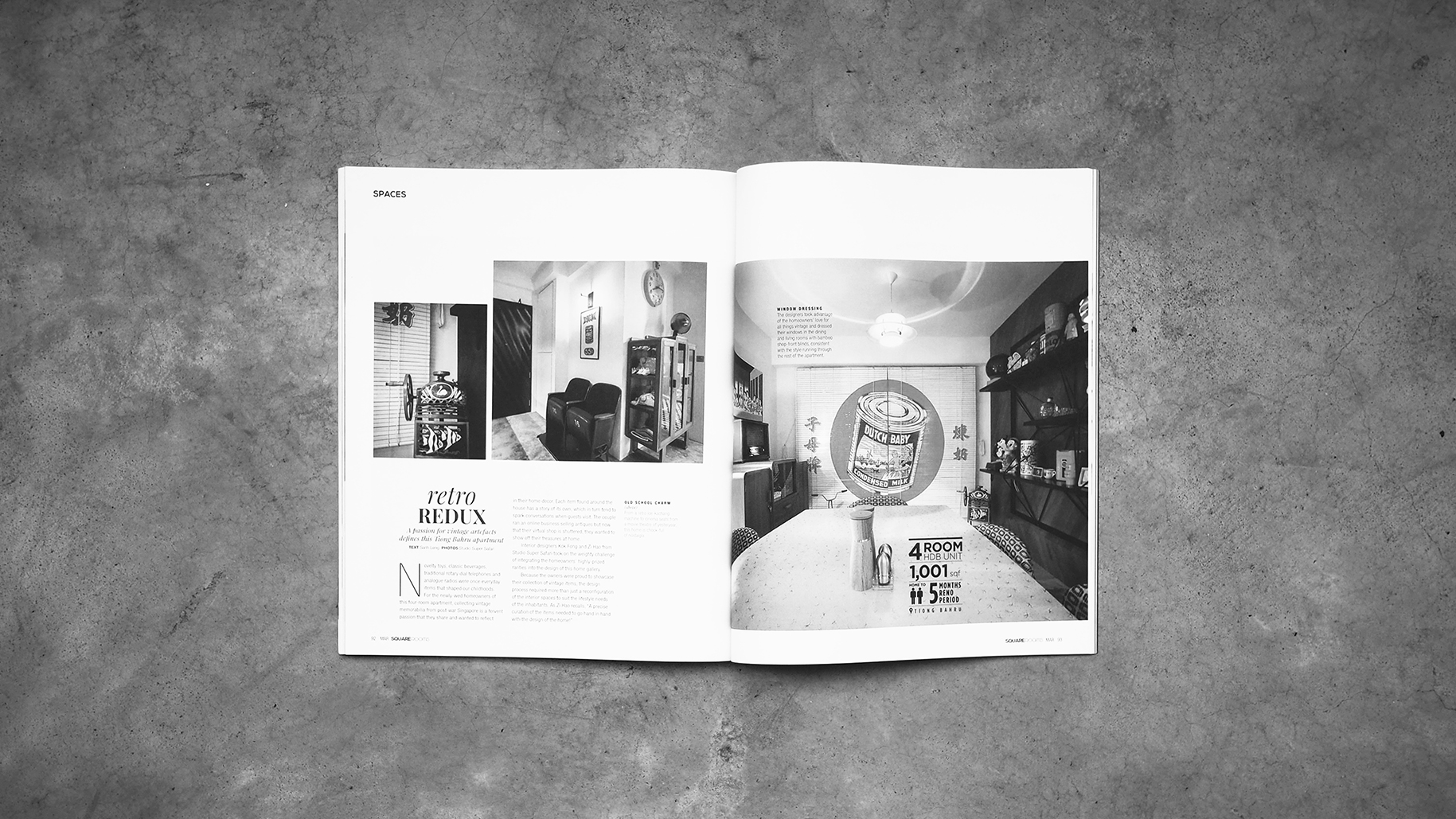 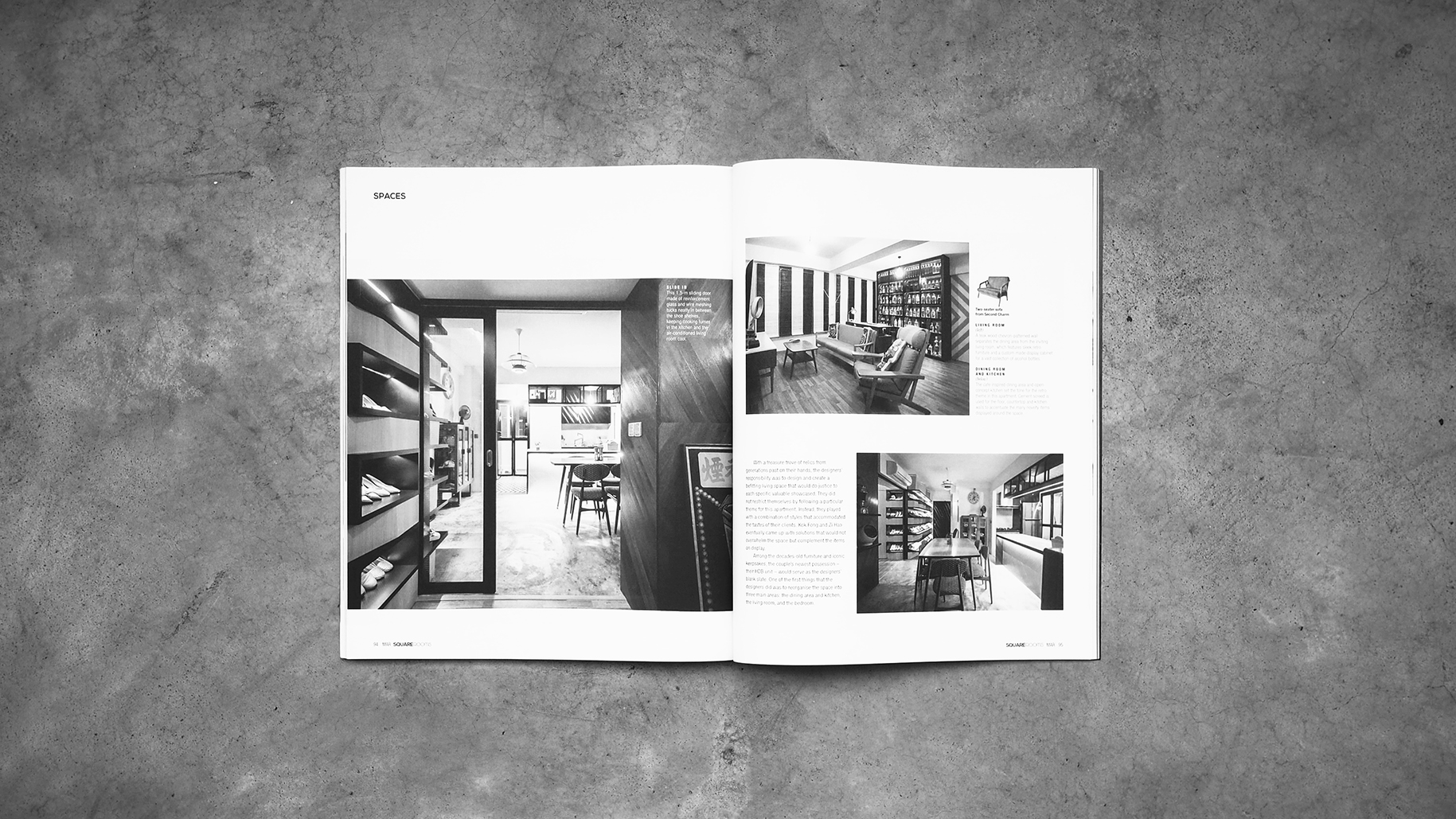 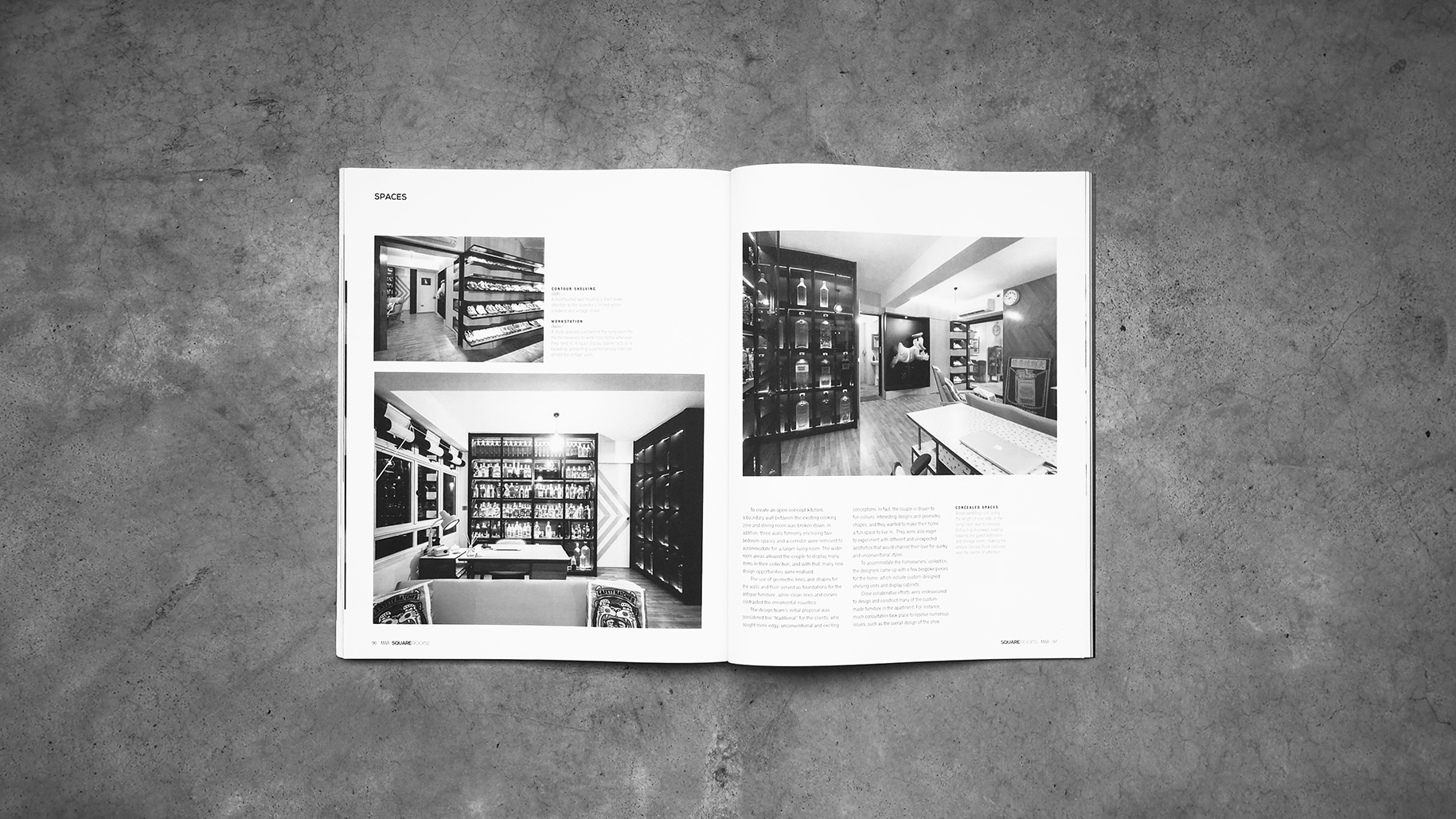 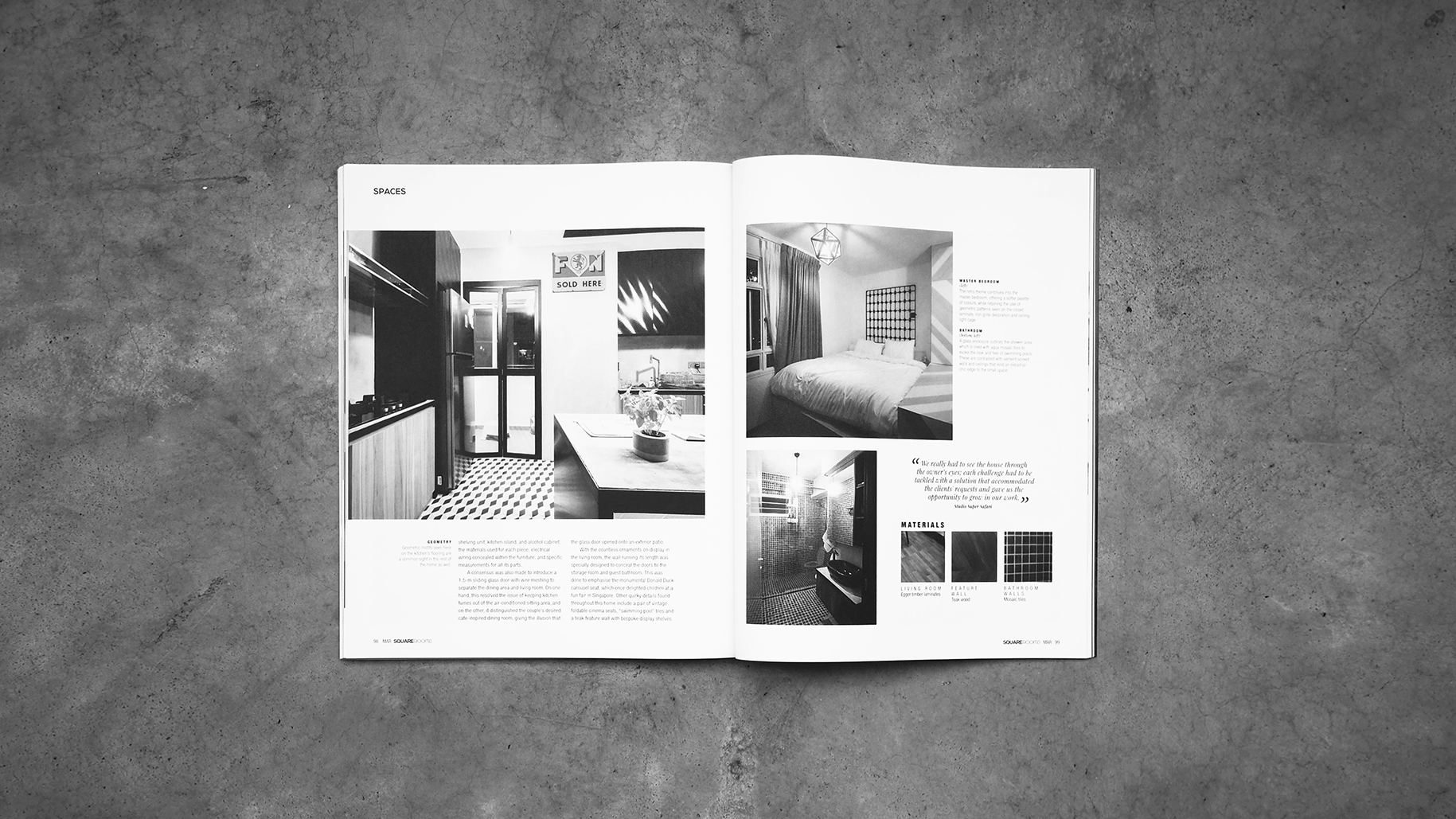 Novelty toys, classic beverages, traditional rotary dial telephones and analogue radios were once everyday items that shaped our childhoods. For the newly-wed homeowners of this four-room apartment, collecting vintage memorabilia from post-war Singapore is a fervent passion that they share and wanted to reflect in their home décor. Each item found around the house has a story of its own, which in turn tend to spark conversations when guests visit. The couple ran an online business selling antiques but now that their virtual shop is shuttered, they wanted to show off their treasures at home.

Interior designers Kok Fong and Zi Hao from Studio Super Safari took on the weighty challenge of integrating the homeowners’ highly-prized rarities into the design of this home gallery.

Because the owners were proud to showcase their collection of vintage items, the design process required more than just a reconfiguration of the interior spaces to suit the lifestyle needs of the inhabitants. As Zi Hao recalls, “A precise curation of the items needed to go hand in hand with the design of the home!”

With a treasure trove of relics from generations past on their hands, the designers’ responsibility was to design and create a befitting living space that would do justice to each specific valuable showcased. They did not restrict themselves by following a particular theme for this apartment. Instead, they played with a combination of styles that accommodated the tastes of their clients. Kok Fong and Zi Hao eventually came up with solutions that would not overwhelm the space but complement the items on display.

Among the decades-old furniture and iconic keepsakes, the couple’s newest possession – their HDB unit – would serve as the designers’ blank slate. One of the first things that the designers did was to reorganise the space into three main areas: the dining area and kitchen, the living room, and the bedroom.

To create an open-concept kitchen, a boundary wall between the existing cooking zone and dining room was broken down. In addition, three walls formerly enclosing two bedroom spaces and a corridor were removed to accommodate for a larger living room. The wider room areas allowed the couple to display many items in their collection, and with that, many new design opportunities were realised.

The use of geometric lines and shapes for the walls and floor served as foundations for the antique furniture, while clean lines and curves contrasted the ornamental novelties. The design team’s initial proposal was considered too “traditional” for the clients, who sought more edgy, unconventional and exciting conceptions. In fact, the couple is drawn to fun colours, interesting designs and geometric shapes, and they wanted to make their home a fun space to live in. They were also eager to experiment with different and unexpected aesthetics that would channel their love for quirky and unconventional styles.

To accommodate the homeowners’ collection, the designers came up with a few bespoke pieces for the home, which include custom-designed shelving units and display cabinets.

Close collaborative efforts were endeavoured to design and construct many of the custom-made furniture in the apartment. For instance, much consultation took place to resolve numerous issues, such as the overall design of the shoe shelving unit, kitchen island, and alcohol cabinet; the materials used for each piece; the electrical wiring concealed within the furniture; and specific measurements for all its parts.

A consensus was also made to introduce a 1.5m sliding glass door with wire meshing to separate the dining area and living room. On one hand, this resolved the issue of keeping kitchen fumes out of the air-conditioned sitting area, and on the other, it distinguished the couple’s desired café-inspired dining room, giving the illusion that the glass door opened onto an exterior patio.

With the countless ornaments on display in the living room, the wall running its length was specially designed to conceal the doors to the storage room and guest bathroom. This was done to emphasize the monumental Donald Duck carousel seat, which once delighted children at a fun fair in Singapore. Other quirky details found throughout this home include a pair of vintage foldable cinema seats, “swimming pool” tiles and a teak feature wall with bespoke display shelves.

25_Media_Homedecor_House that Grew (a metre taller)