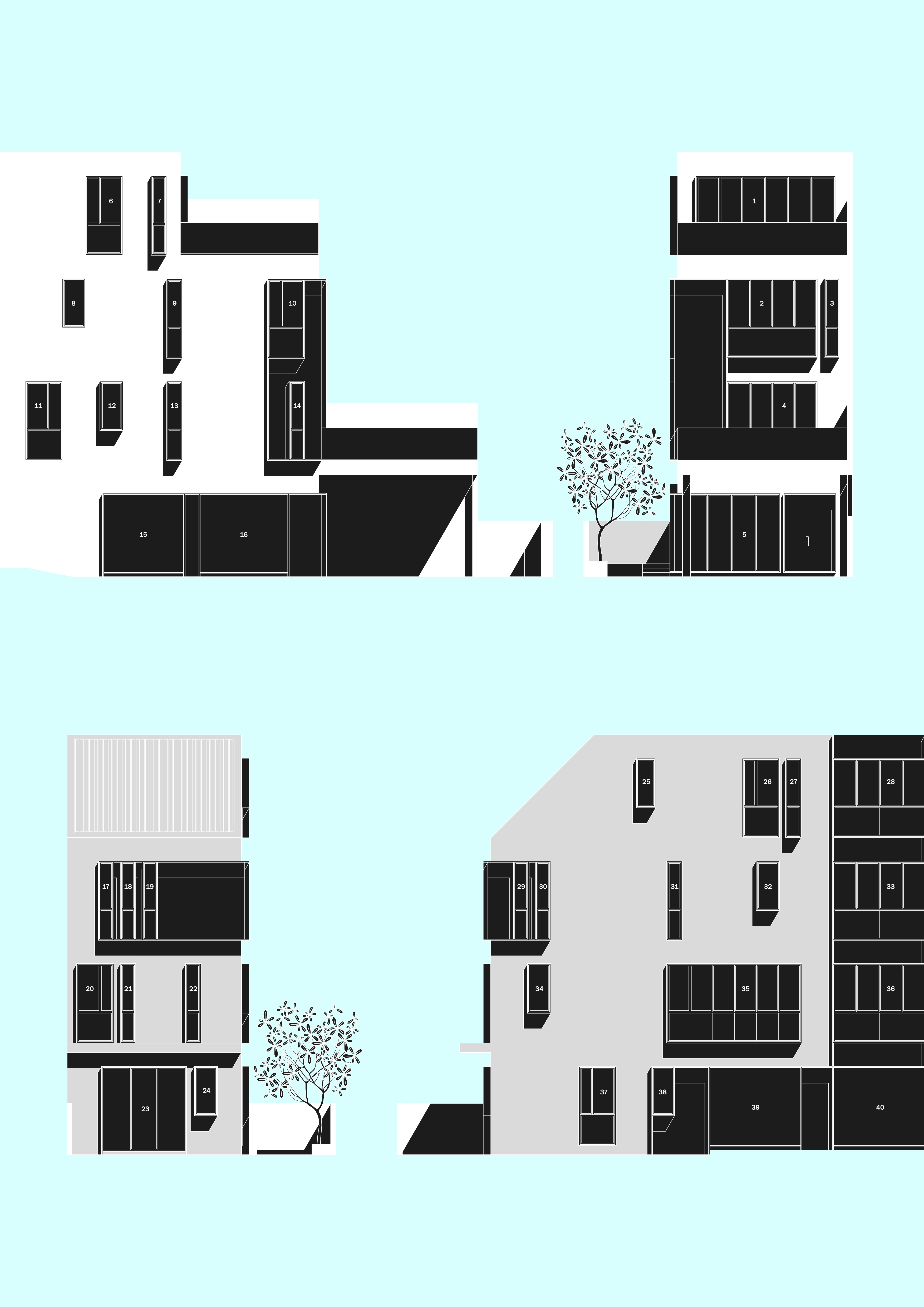 A3-sized printouts of architectural drawings of a semi-detached house in Serangoon Gardens line the studio workbenches as we cross the end of the year – and as the contractor’s office, and the construction site is being prepared for work to happen in 2020.

The printouts are scaled 1:100 – a good size, compatibly fitting within the limits of the A3 pages, matching as well the accuracies afforded by the millimetre/centimetre metal ruler and cutting mat. We made a physical model at 1:100 of the house’s external façade: perhaps to show the clients, partly (a secret desire) to make and visualise the façade patterns in the physical model, partly to document the in-process conversations we have had about arriving at the right configuration, and partly (also another desire) to produce something for the website to end off the year.

While the design had gone well ahead on the computer screen, we could not help but think that the digitally rendered façade needed to be made in a physical model as well. With the computer, and with multiple clicks of the mouse, we “pushed” through volumes, “erased” rectangles from the wall, and “extruded” a composition of deep and shallow framed-boxes for window component. We eventually produced a patterned facade that was essentially a continuous folded wall (or unfolded, depending on how you choose to see it) of front–side–and–back elevations that was poked full of cut-outs. In the bass-wood model, following closely the printed scaled drawings of the facade, we had to cut all 40 of these holes out.

Here’s a thought: the physical cutting – knife blade incising into the timber pieces – reminded us of how cut-outs (cutting away, punching through, and the holes left behind) were used in the analogic processes of storing and transmitting information. In his essay “The Map and the Territory,” in the book Local Code, Nicholas de Monchaux writes about the punch card to be more than a means of registering workers’ attendance, but also an innovative method for the US government to track and organise population demographics that went into the planning of urban policies. For many Singaporeans, the holes in office punch cards, as with the holes made by tearing out numbered circles in paper car coupons (with the torn out numbers casually flicked out into the grass-patched parking lots) registered one’s attendance, or that someone had paid their dues (for which the angel-in-white passed-over one’s car). A hole punched in an Identification Card, or a passport, meant that one had gotten new personal documents, replacing the old ones effectively. In old-school wind-up musical boxes (they still do sell them at novelty gift shops these days), a pattern of strips punched into thin metal ribbons in the cylinder produced a tune as the holes scrapped past the combs of the miniature lamellophone. A different pattern of holes produced a different tune. The cut-outs, or holes, or the absence of things subtracted from surfaces, can store and transmit information. Cut-outs can tell us what is inside something.

As the craft knife cuts through the walls of the 1:100 house, and a range of differently sized rectangles of timber are pushed out of the surface, we now wonder what the pattern of cut-outs on the external elevation may show about the inside of the house. Are these in fact interior sequences of room–room–corridor–room–corridor–room? Or privacy-public transitions: balcony–bedroom–bathroom–hallway–bathroom–bedroom? What do the patterns tell about the house in white at the front, and the other grey house at the back? Are these two houses separate or as one? What are the cut-outs saying? 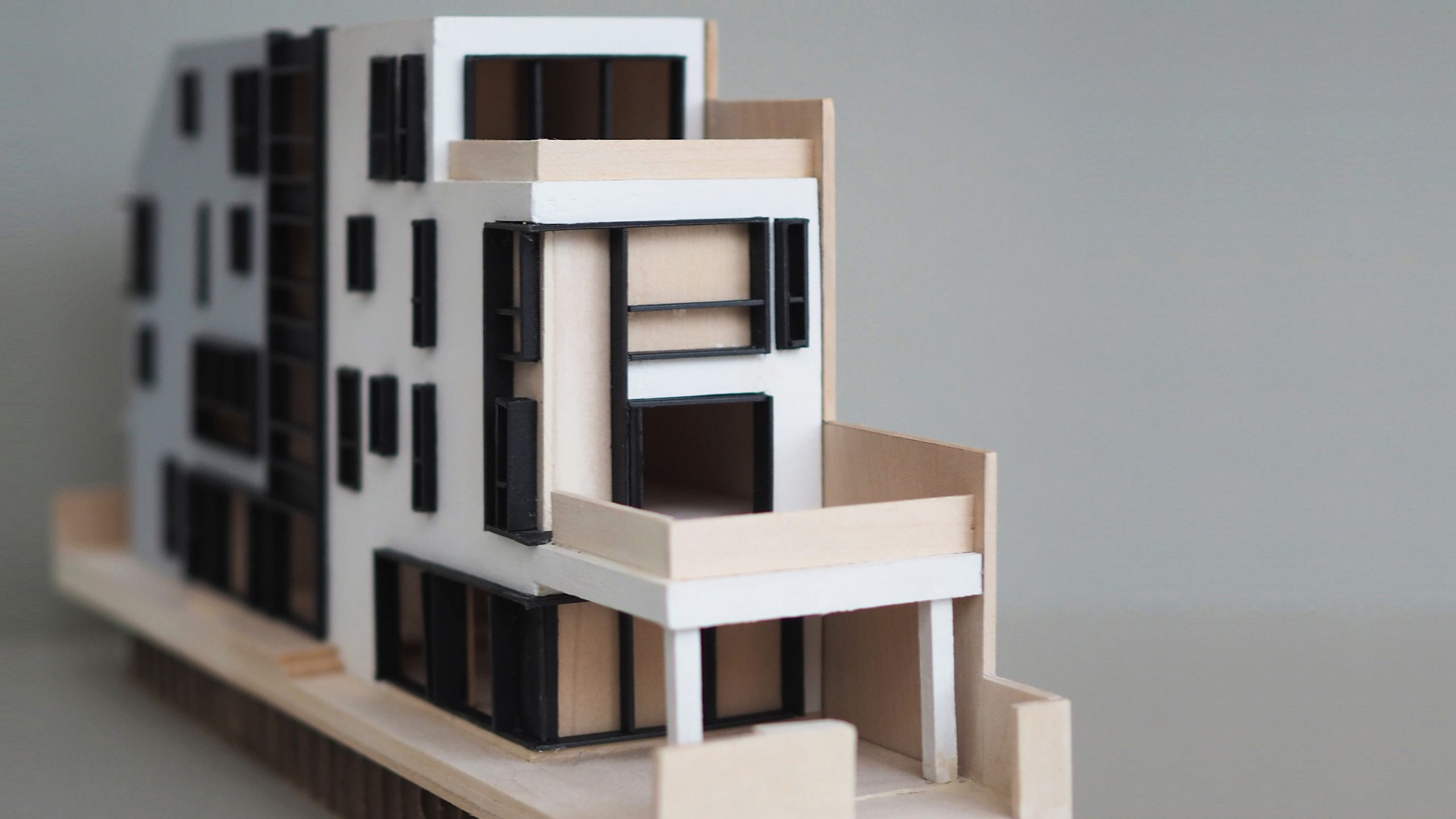 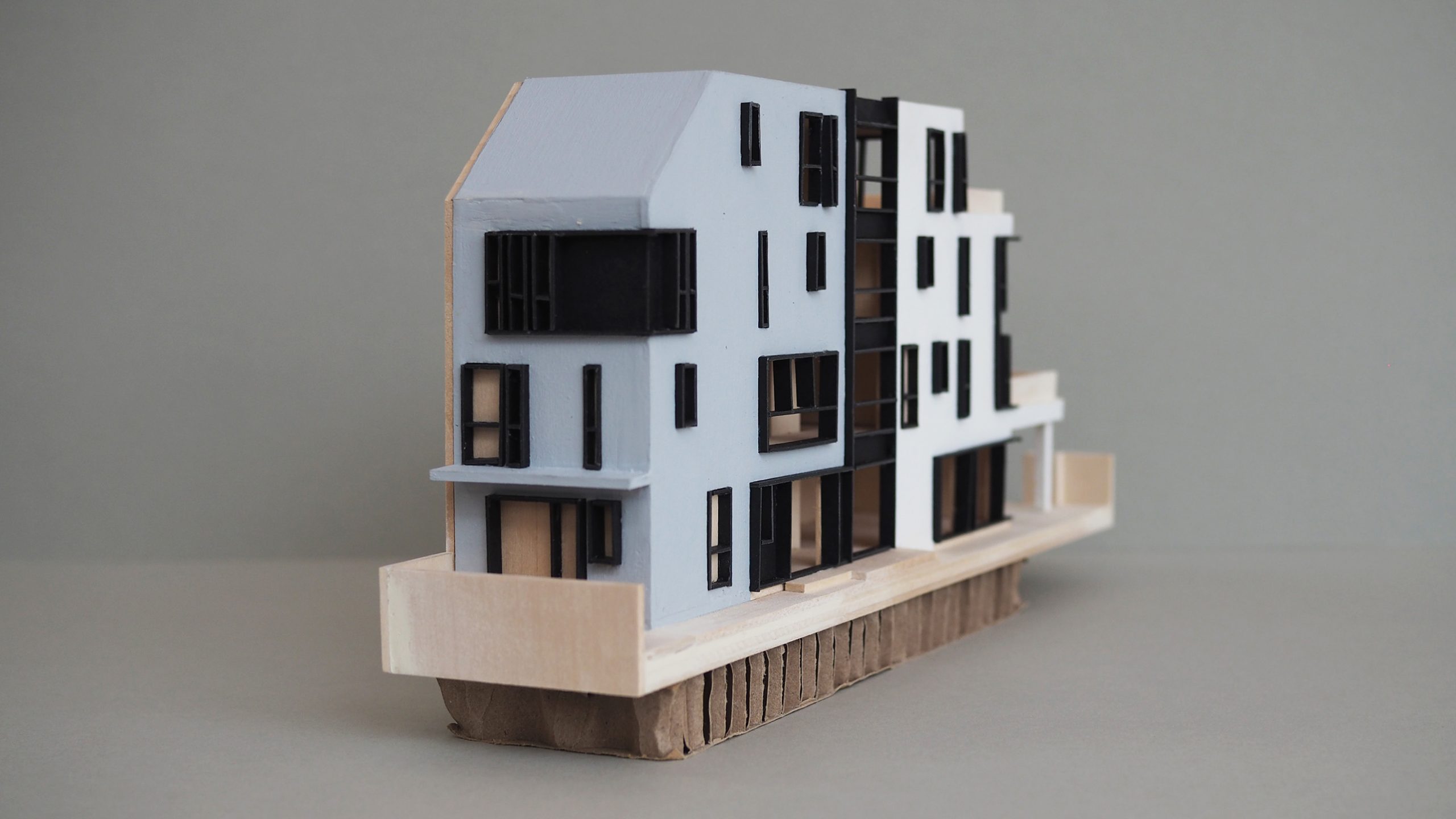